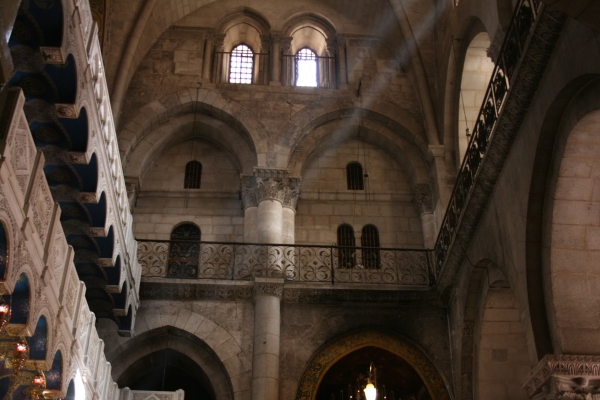 By the time Jesus was born, the Jews had been looking forward to the coming of the Messiah for a very long time. They were hoping that Jesus would establish an earthly kingdom, liberating them from the rule of the Roman empire. But the Kingdom that Jesus came to establish is not of this world.

Luke 17:20-21 (WEBBE): 20Being asked by the Pharisees when God’s Kingdom would come, he answered them, “God’s Kingdom doesn’t come with observation; 21neither will they say, ‘Look, here!’ or, ‘Look, there!’ for behold, God’s Kingdom is within you.”

At that time, nobody could really understand the meaning of the crucifixion yet. It was still hidden, even to the Jesus’ disciples. Just look at how Peter reacted when Jesus announced that He will die.

Matthew 16:21-22 (WEBBE): 21From that time, Jesus began to show his disciples that he must go to Jerusalem and suffer many things from the elders, chief priests, and scribes, and be killed, and the third day be raised up.

22Peter took him aside, and began to rebuke him, saying, “Far be it from you, Lord! This will never be done to you.”

The community leaders also didn’t understand how Jesus would bring salvation. They perceived Jesus as a trouble maker, and they wanted to get rid of Him. They thought if they killed Him, that would be the last they hear of Him.

Matthew 26:3-4 (WEBBE): 3Then the chief priests, the scribes, and the elders of the people were gathered together in the court of the high priest, who was called Caiaphas. 4They took counsel together that they might take Jesus by deceit, and kill him.

Paul wrote in his first letter to the Corinthians that the rulers that crucified Jesus didn’t know what the outcome of it would be. If they had known that Jesus was meant to die for us, they would not have done it!

1 Corinthians 2:7-8 (WEBBE): 7But we speak God’s wisdom in a mystery, the wisdom that has been hidden, which God foreordained before the worlds for our glory, 8which none of the rulers of this world has known. For had they known it, they wouldn’t have crucified the Lord of glory.

Colossians 1:26-27 (WEBBE): 26the mystery which has been hidden for ages and generations. But now it has been revealed to his saints, 27to whom God was pleased to make known what are the riches of the glory of this mystery amongst the Gentiles, which is Christ in you, the hope of glory.

1 Peter 1:17-21 (WEBBE): 17If you call on him as Father, who without respect of persons judges according to each man’s work, pass the time of your living as foreigners here in reverent fear, 18knowing that you were redeemed, not with corruptible things, with silver or gold, from the useless way of life handed down from your fathers, 19but with precious blood, as of a lamb without blemish or spot, the blood of Christ, 20who was foreknown indeed before the foundation of the world, but was revealed in this last age for your sake, 21who through him are believers in God, who raised him from the dead, and gave him glory, so that your faith and hope might be in God.

It was God’s plan all along, even from before creation, that Jesus would die to save us and defeat death itself. He had hidden it for our sake until the right time. And now it has been revealed. God lives in us!